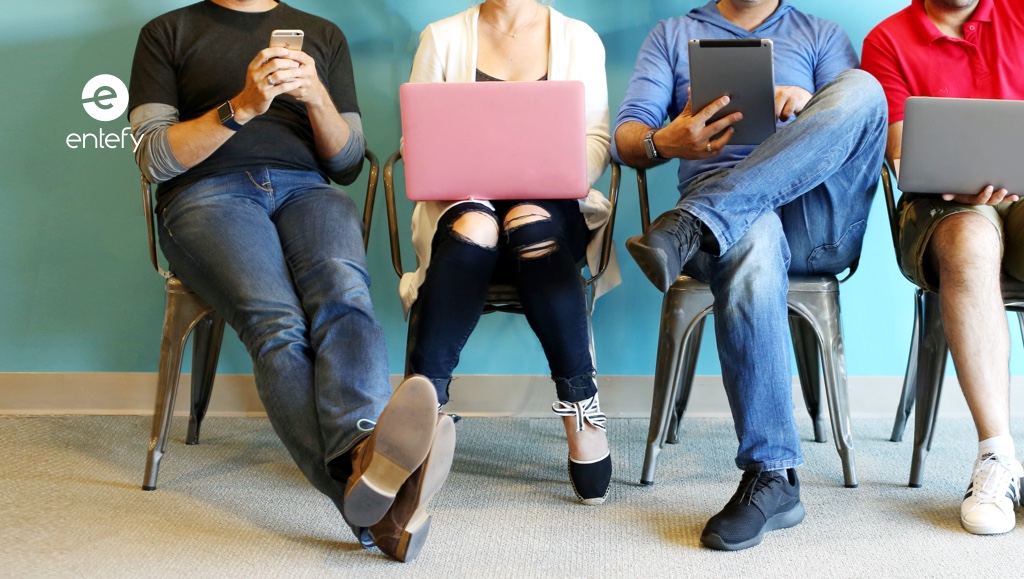 Digital technology is the wondrous vessel for connecting across distances, getting the job done, discovering boundless information, and increasing professional productivity. But at the same time, there is deep wisdom in the old expression “too much of a good thing.” An idea that certainly applies to how we use digital devices. Finding that balance is something we’re all figuring out together—after all, we’re less than 10 years into the smartphone era and so much work today involves long periods of screen time. This shouldn’t come as a surprise to anyone.

What is surprising, though, is the evidence to emerge over the past several years about the impact our digital habits are having on our physical health. We did some research and assembled a list of the potential health repercussions of habits like regularly hopping in and out of 7.9 different communication apps or falling into the “busy trap” on our devices.

So here are 11 digital habits that science tells us can stress physical health:

1. Placing a laptop on the lap while connected to Wi-Fi decreases sperm count in men. It might be time to reconsider the “lap” part of laptop. An American Society for Reproductive Medicine study analyzed men’s sperm after being exposed to an Internet-connected laptop for four hours. Results showed that sperm was significantly lower in mobility and suffered from DNA fragmentation. While acknowledging that further studies are needed, scientists concluded: “We speculate that keeping a laptop connected wirelessly to the Internet on the lap near the testes may result in decreased male fertility.”

2. All that typing on handheld devices can lead to “text claw.” It sounds bad, and it can be. If you’ve ever felt soreness or cramping in your fingers, wrist, or forearm after long bouts of texting, you might be suffering from “text claw.” The soreness might go away, but over the long term without proper treatment and stretching, muscles can become fibrotic and scarred. Here are some stretches that can alleviate pain from smartphone use.

3. Looking down at a device can lead to “text neck.” Data shows that Americans spend an average of 4.7 hours daily on their smartphones. The posture we often assume while doing so involves tilting our heads forward to be closer to the screen. The next time you’re walking and texting, check and see if you do it, too. The challenge with this habit is that even a modest 15-degree tilt of the head creates 27 pounds of pressure on our spines. Which stresses out our backs big time, potentially causing pain and inefficient breathing, to name a few.

4. Then there’s the sagging skin of “tech neck.” As if “text neck” wasn’t bad enough. Another study found that women aged 18 to 39 who own an average of 3 digital devices are experiencing wrinkling and sagging of the skin on the neck from prolonged time looking down at devices. This can cause the neck skin to crease and compound the natural effect of gravity pulling the skin downwards under the chin. Eventually, wrinkles and reduced skin elasticity can result.

5. Using a smartphone can give you pimples. Acne probably isn’t something you think about when using your smartphone. But we put our phones to our faces multiple times every day, so it’s natural that traces of oil and skin debris adhere to the phone. This creates an environment perfect for bacteria to thrive. Combine that with another finding that mobile phones can have more bacteria than toilet seats and, eww. One doctor stated, “It seems that the mobile phone doesn’t just remember telephone numbers, but also harbors a history of our personal and physical contacts such as other people, soil and other matter.”

6. Use of technology is correlated to reduced exercising around the globe. There is evidence that rates of physical activity are decreasing worldwide due to increased use of technology. One study projected that in the U.S. sedentary activities will increase to 42 hours per week by 2030. The findings are similar for other countries, including China, Brazil, and the UK.

7. Too much screen time causes dry eye and eye strain. Did you know that when we look at things close to our faces, our blink rate slows down? When we stare at screens, we are blinking less, which means tears evaporate faster, causing dry eye. In addition, our eyes converge when we look at screens and our pupils get smaller. This causes strain because our eyes are more comfortable when they are parallel looking into the distance. The American Optometric Association recommends the “20-20-20” rule: every 20 minutes, take a 20-second break to look at an object 20 feet away.

8. Poor posture and poor breathing from typing at a desk go hand-in-hand. It isn’t news that sitting for long periods has negative effects on posture. But poor posture also affects how we breathe. Lungs are like two big balloons, so when we’re slouched they have a decreased range of motion and breathing can become labored and inefficient. What postures can be culprits? Furniture maker Steelcase completed a global study of 2,000 people in 11 countries that identified 9 new postures—from the Cocoon to the Swipe to the Strunch—that emerged from the common ways we position our bodies while using digital devices.

9. Earbuds can create hearing loss and tinnitus. Setting the volume on your earbuds too high when listening to a conference call or music can cause hearing loss and tinnitus. More people of all ages are wearing earbuds and headphones for longer stretches of time. The impact of this behavior change is captured in a study published in the Journal of American Medicine, which found that 19.5% of American adolescents aged 12 to 19 suffered from hearing loss, up 33% from the 1990’s.

10. Digital motion sickness can affect 50-80% of people not otherwise prone to motion sickness. If you’ve ever been rapidly scrolling through social feeds and suddenly felt a dull headache or nausea, you’re not alone. There’s such a thing as digital motion sickness, which stems from “a basic mismatch between sensory inputs…Your sense of balance is different than other senses in that it has lots of inputs…When those inputs don’t agree, that’s when you feel dizziness and nausea.”

11. Blue light emitted from devices interrupts sleep cycles. Research shows that the blue light emitted from devices can have an impact on our sleep patterns. The light affects melatonin, the hormone that helps us go to sleep and our body’s natural clock called the circadian rhythm. Habitually using devices before bed tends to make it harder to fall asleep and reduces REM cycles during sleep.

Digital technology is a consequence of our modern life, but hopefully a little more awareness of what science has to say will help you find your own “just enough” of a good thing.